Possession is an Action card from Alchemy. It lets you control an extra turn being taken by your opponent and steal any cards they gain during it—so you can take advantage of their engine without having to build it up yourself. Of course, be prepared to have the same done to you.

As a card with a powerful and complicated effect that can occasionally lead to frustrating game states, Possession tends to be unpopular; for this reason, it is treated as a banned card by default at Dominion Online, unless players intentionally remove it from their ban list.

† Some rulebooks erroneously refer to the player to your right here.

Possession is a powerful and unusual card that can significantly warp a game because it effectively lets you play with and benefit from an opponent’s deck. The effect of playing a single Possession can be quite similar to just getting an extra turn; however, if you can consistently play multiple Possessions per turn with your own deck, you will make more use of your opponent’s deck than you will of your own, which distorts the game’s incentive structure considerably and can occasionally lead to stalemate-like situations if all players are able to do this. There are also various interactions that can mean Possession turns function significantly differently compared to extra turns with your own deck.

Possession is comparable to a very expensive terminal payload card—it is often best bought after you first build an engine, ideally with enough extra terminal space and draw to reliably play Possession multiple times (possibly with Throne Room variants), and can allow such an engine to come back from a

deficit via extra turns. Although its effect is often very strong, Possession is extremely expensive, so it’s sometimes too slow to provide you with a significant advantage over other strategies. Not only does it require significant

; acquiring this represents a significant opportunity cost, and it’s likely that you’ll need good draw to collide it with enough

. Occasionally, Possession is significantly easier to acquire with effects that allow you to gain it without adding a Potion 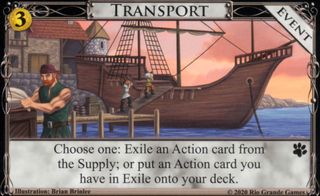 . More generally, however, it is sometimes the case that by the time you can play Possession, you could have instead, for example, constructed a money deck that could have already bought the bulk of the Provinces

An important question to answer when evaluating Possession in a given game is how much benefit you can extract from turns on which you Possess your opponent. These turns are most likely to pay off if you anticipate being able to Possess a deck that runs well and is effective (providing plenty of gains and/or scoring potential from the extra turns), or if your opponent’s deck is vulnerable to being damaged during turns on which you Possess them.

It is important to note that the impact of Possession varies according to the efficiency of your deck in relation to the deck you Possess, and the ratio in which you end up playing turns with each deck. If your deck performs better, Possession is less useful for you but more useful for your opponent to use against you. Therefore, it's often optimal for you to sabotage the quality of your own deck’s non-Possession payload once you can consistently draw and play multiple Possessions per turn, if you anticipate your opponent being able to do the same, as this means that they can extract more benefit from your deck payload than you can. This means you may want to trash your payload cards (or at least avoid adding more), spend your Coffers, and perhaps even take on as much Debt as possible, while using the payload provided by your opponent's deck to continue to build and maintain deck control (ensuring that you can keep playing your Possessions) and/or to green. If all players adopt this approach, a stalemate can sometimes be reached, in which everyone’s deck can do little but play Possession(s) and no one is incentivised to move the game forward.

Certain cards and other effects can function significantly differently on a Possession turn, and the optimal way to use them depends heavily on how many Possessions you can play—that is, whether it’s preferable for you to sabotage your opponent’s next turn (because it will be back under their control) or improve it (because this is the first of multiple Possession turns, or you anticipate consistently playing multiple Possessions on your own future turns). In some cases, you should also take care with adding the relevant cards to your deck when Possession is in the Kingdom. 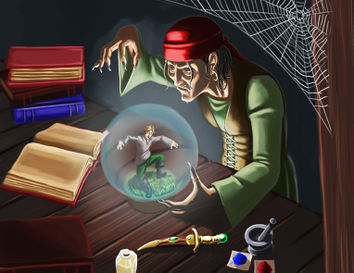 Possession is the card which has the longest FAQ.

The most common question is, if you Possess someone and make them play Possession, who controls that turn? They do. Possession isn't an attack, but can feel like one, and sometimes you'll try to defend against it. One obvious thing to do is to buy attacks. Not attacks that gain you cards - hurty attacks. If you Possess me and I've got Witch

in my hand, do you play it? Either way, that hand was better for me (had I gotten to play it) than it was for you. You are not getting full value from that Possession. Another trick is to go for special victory cards like Gardens

. In a typical Gardens

deck, my hand is full of Copper

s and Victory cards. I'm just trying to get to

. If you Possess me and I do have

this turn, the best you can do is take a Gardens

away from me. You built a deck that can make

; you're going for Province

s. Once again my hands are better for me than for you.
—Donald X. Vaccarino, Dominion: Alchemy Preview

Originally this had you take a turn in which you drew cards from another player's deck. It was much simpler rules-wise to have them take the turn, with you stealing the cards they gain. That may sound funny given that Possession has a longer FAQ than any other card will ever have (for those of you reading this who haven't seen the rulebook: it's over a page long). The FAQ is ridiculous, but it's still a FAQ; most of the time, you are covered just reading the card, and the most common thing you will want to know is, "what if I make someone play Possession while I'm Possessing them?" (they get to possess someone, not you). But it was an exotic card that required a lot of FAQ. There was some question as to whether or not it was worth it and well I always thought it was. One other thing changed about the card: originally you possessed to the left, then to the right, and now it's left again. Wei-Hwa pointed out that going left created a kingmaker situation with Masquerade in games with 3+ players - you can make someone pass a Province to someone else. There is no kingmaker situation to the right - you make them pass the Province to you. Going right is more weird though. When Jay got the file he said, really? The player to your right? The games where it matters aren't so common, so it ended up going left after all. Watch out in games with Possession and Masquerade (yes, and Ambassador).
—Donald X. Vaccarino, The Secret History of the Alchemy Cards

Possession has way too long of a FAQ and would be better in a large expansion, which Alchemy originally was. It's a card some people adore though, and reasonable except for the FAQ issue. I don't know what can be done about the FAQ but I do not look at Possession and think, oh I shouldn't have made that one.
—Donald X. Vaccarino, What Donald X. Might Do With a Dominion Time Machine

Possession is super-confusing. In the years since it came out, that has been most of what I have uh felt apologetic about. The big Smugglers 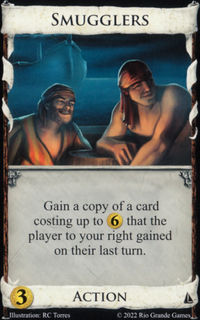 100% fixes that, and that's 100% of what it's trying to fix (yes it's also faster). You have to remember stuff but at least know it's coming up. A lot of the time it is not much to remember. I'm not saying "yeeha let's make some cards with awful tracking issues." In case it seems like that.

Possession is also hated by some people. I like to say, if there were no cards people hated, there would be no cards people loved. But well. You have to consider things case by case anyway. Maybe something is too hated by the people who hate it, or hated too often. Mostly I have not felt like this is the case with Possession - instead again I think the confusion is the big problem. But. I don't have market research really. Maybe it's too hated. It's not like the game has to have that particular concept. If time had permitted I would have tried other big effects for that slot, because it was in fact clear that the card was confusing; time did not permit. A lesson in what to do when people say "we need this fast."

I always think that kids in particular like Possession, but I don't know that they need that particular thing to get that particular joy. Smugglers for example may be doing the trick. They (in my imagination with no market research) want to be rewarded for Mom being better at the game than them; that doesn't require taking a turn with her deck.
—Donald X. Vaccarino, the possession errata is the worst thing to happen to dominion in ages

I'm not seeing any Possession-inspired cards in the recent secret histories. The first thing that comes to mind is, a few cards over the years have tried to play one of someone else's cards, which has been lame or overpowered depending, and never especially interesting.
—Donald X. Vaccarino, Dominion Discord, 2019

Why doesn't Possession limit itself?

, given how expensive Possession is. It didn't come up as a problem for us. I wasn't yet thinking in terms of how much text would fit well on a card; Possession has especially small text to get all those words on there, and that's just because, those were the words I handed over. Sure if you couldn't play two in a turn the card would be some amount less of a problem, but as usual the real fix is to not do Possession.
—Donald X. Vaccarino, Why is Possession hated so much?