Displace is an Action card from Menagerie

. It is similar to a remodeler, but Exiles cards instead of trashing them. Since the card you Displace remains yours, the effect is also similar to that of a gainer.

Displace is a Remodel variant with two key differences:

In the early game, Displace functions similarly to Remodel

. It is primarily good at removing Estates

from your deck and turning them into

is a weak play unless there is a

card in the Kingdom that doesn’t hurt your deck. Therefore, when deciding whether to take a Displace early, consider the likelihood that you will be able to line the Displace up with Estates

In the mid- and late- game, Displace functions very differently from Remodel

. You can Displace Action cards or Treasures without permanently removing them from your deck. This allows you to use Displace as a pure gainer, so long as you gain another copy of the exiled card. It is often an effective strategy to displace Golds

, then unexile the displaced Golds

so they can be used again. This strategy is improved by the presence of an additional Victory card costing

or more, so you can Displace that back and forth with Province and gain

with every displacement. Since you can Displace Victory cards without losing

, this also incentivizes you to add Victory cards a little earlier than normal, as they can always be turned into good cards without losing the points, and displacing

cards lets you score without adding stop cards to your deck.

Unlike other Remodel variants, Displace doesn’t always encourage you to end the game quickly. Since Displace cannot be used to turn a Province

, it is not quite as effective at emptying the Province

pile via milling. On the other hand, Displace can add Victory cards without hurting deck quality, which may allow you to gain more of the non-Province Victory cards. In games with no Alt-vp, Displace still encourages a fast endgame as Duchies

are only worth ½ as much as Provinces. However, with Alt-VP, especially expensive high point-value cards, you can often play a longer game where they gain and exile a bunch of Victory cards. 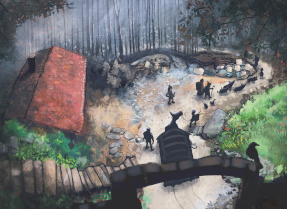 more," now it's "differently named" with "up to

more." I think Ben King suggested that. It's nicer as an exiler while still stopping you from using Province