Fan cards are unofficial Dominion kingdom cards created by fans of the game for personal use.

The Fan Card Creation Guide is an extensive collection of tips and guidelines for fan created cards written by user rinkworks. The guide is well respected and often referenced in the design and critique of fan made cards. The original guide is broken down into the chapters listed below:

An updated version of the original guide was written by user Aquila; it features more of an emphasis on the design cycle, planning out which mechanics to use, and how to test your cards. The guide is broken down into the chapters listed below:

Both guides have been combined into the wikified Fan Card Creation Guide for ease of reference for newer fans/designers. 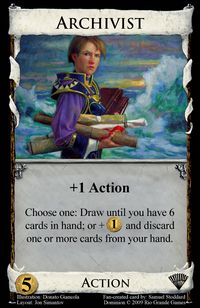 Card mock-up for Archivist made by jsimantov of Board Game Geek.

In October 2011 user Davio organized a fan card creation contest.[1] As motivation to receive quality entries, Davio offered a modest prize of an Amazon gift card. Davio received 20 entries and allowed the community to vote on the winner. The chosen winner was Archivist, a card designed by rinkworks.[2] The card was an example of a single card engine, with the following card text:

To the surprise of the community, Davio had secretly contacted dougz and the card was playable for a limited time on Isotropic.[3] This is the only instance of an unofficial Dominion card being playable on the public version of Isotropic.

As a followup to Davio's contest, rinkworks later launched a far more ambitious design contest. The second contest attempted to create a complete mini-set of cards, with every card in the set being designed, voted on, and fine tuned by members of the community. There was a full subforum dedicated to the contest on the forums.[4]