Inn is an Action card from Hinterlands. When played, Inn is a mix between Village

; it can fit well into a lot of engines but probably isn't worth

. The on-gain effect, which allows you shuffle in actions from your discard into your deck, can set up some extremely powerful turns.

Inn is generally a powerful card, but it can be subtle, and requires more skill and thought to play than most cards yielding +Actions. It combines the effects of a Village

with a weaker Warehouse

, but unlike most villages, it makes you discard as many cards as you drew. The decreased hand size can hurt, especially against discard attacks. However, when the discard can be mitigated, such as with Library

, Inn is often one of the better villages you can have. Inn has particularly good synergy with Menagerie, as Inn can rid the hand of duplicate cards.

One of the key powers of Inn is in the on-gain effect; being able to set up your next turn every time you buy a village is a strong benefit, though the

price tag is rather high for a village which offers no

. The on-gain ability can be unreliable at times, since you need Action cards in your discard to get its full effect. However, you can play your cards so that you only end up buying Inn when your deck is running very low. If you've spent the previous shuffle buying powerful Actions, doing so will likely allow you to have a huge turn, during which you play though most of your deck, allowing you to once again buy an Inn and repeat this process. 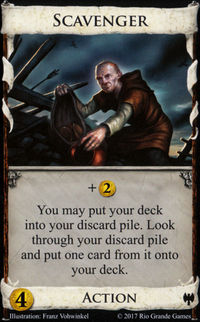 and the normally weak Chancellor

are very useful in making an Inn purchase more effective. If you are not using the on-gain effect of Inn, the card is usually overpriced.

Inn's deck-cycling ability becomes more beneficial in mid to late game, as you buy more victory points. In games without other sifters, this benefit can enable you to purchase victory points a bit earlier than you normally would.

Inn can be a key card in games with cursing attacks. A well-timed Inn purchase can allow you to reshuffle your cursers along with the newly purchased Inn back into the deck, to play them again quickly and win the cursing race. Inn's sifting also benefits curse-laden decks and is particularly useful in the absence of trashing.

Engines constructed using Inn as a main source of actions typically require different construction and strategy. A standard deck-drawing strategy is weaker with Inn, as more cards are required to draw the whole deck. But Inn smooths out an engine, allowing you to sift through to find the next card to play in a way that other villages do not. 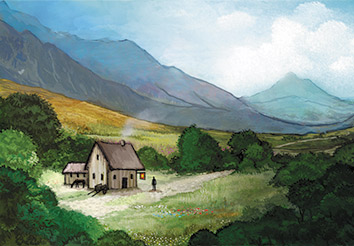 Inn has an especially exotic when-gain ability: it shuffles Actions from your discard pile into your deck. Since you haven't gained a card until you've gained it, normally this includes the Inn itself, which it helpfully reminds you. And hey, it helps you play those Actions, so you'll probably choose to shuffle it in. With a

opening, Inn gives you a good chance of never getting that

Inn is somehow the 3rd Village I've previewed. The set only has three Villages, they were just all cards I wanted to show off.
—Donald X. Vaccarino, Hinterlands Previews #5

Inn was never officially previewed due to a leak at Essen, but Donald X. later released this text anyway.

Long ago, there were two similar simple cards for

in different sets. The first was +2 Cards, +1 Action, discard a card; the second was +2 Cards, +2 Actions, discard 2 cards. For a while they both seemed fine, but eventually I decided the first one was too strong, and it is no longer with us. The second one was Inn. It was fine, it was never changing. But one day I came up with the bottom part, and needed a card to graft it onto. Inn fit and was simple enough and there it is. I briefly tried it for

without the discarding.
—Donald X. Vaccarino, The Secret History of the Hinterlands Cards