Vassal is an Action card from the second edition of the base set. If the top card of your deck is an Action, Vassal can play it; otherwise, the top card is discarded. Either way, it gives +

Vassal is strong in decks with high action density when you have some +action to spare. However, be aware that there are some cards you sometimes don't really want to reveal (though playing them is optional). (For instance, your Trade Route

when you have only strong cards in hand). It is best with strong trashing. 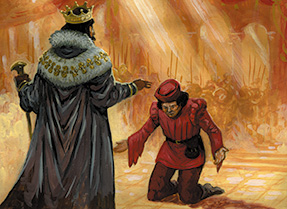 This is the new Herald

; a mirror image of what I did for Harbinger

. Originally it left the card on top, but discarding it is usually better and made the text simpler.
—Donald X. Vaccarino, The Secret History of the Dominion 2nd Editions