Harem is a Treasure-Victory card from Intrigue. It gives

, one less than a Duchy

. In Big Money-like games, Harem can often be a better buy than Gold

, after you have your first Gold.

Harem is a curiously underrated card. Bedazzled by the allure of Gold

, many players pass on them entirely until the late game, treating them as consolation prizes for missing out on Provinces

. Nothing could be further from the truth: in a Province game, the general rule for Harem is to buy it over Gold when you would buy a Province over a Gold.

There are, of course, countervailing considerations: for starters, in Colony

games, Harems become less important, since their VPs matter less and getting to

requires much stronger buying power than Harem can provide. Moreover, attacks tend to hurt Harems more than Gold. This is especially true with Militia

and other handsize reduction attacks: because Harems are worth only

, Harems alone cannot get you to Provinces if you’ve been Militia’d. Unlike Harem, Golds are not affected by an opponent’s Bureaucrat

on the board, you would probably rather purchase Golds (to help you get Provinces earlier) and Remodel them into Victory points.

But these exceptions aside, Harems generally become preferable to Gold far sooner than most players think. The point at which you should take a Province over a Gold depends on the nature of your deck, but as a general rule, unless you find yourself at

unexpectedly early (before you have even a single Gold), or you don’t anticipate ever reaching

again (and would rather buy Duchies), you should almost never pass up a Province for a Gold in a non-Colony game. Likewise, in solitaire Province games, simulations demonstrate that strictly buying Harems (and never Golds) does considerably better than strictly buying Golds (and never Harems), and the optimal transition point for Golds to Harems is extremely early on. Of course, these simulations don’t take into account attacks or the value of

cards (all of which counsel in favor of Golds), but as a general rule, you should probably be buying Harems before you think you need to.

. They interact well with Mine

, since not only can you upgrade your Silvers into Harems, you can “downgrade” Golds into Harems in the late-game. Late-game Mints

also become meaningful with Harems in play, since you don’t have to wait for the reshuffle to experience the benefit. And like all mixed Victory cards, a high concentration of Harems synergizes very well with Scout

Finally, Harem makes for... rather odd (some might say distasteful) thematic interactions. It’s amusing to imagine how, exactly, Thieves

can come in and rob you of an entire Harem, or how a Mine can turn Silver into a group of women. You’d also think that the Harem would cost you money, but apparently it provides a source of income instead... 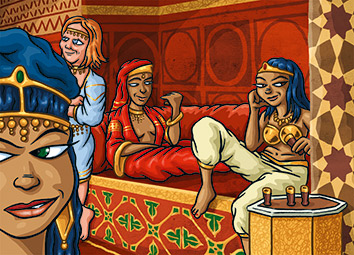 Until Empires, Harem was the only Treasure–Victory card. Donald X. Vaccarino designed and playtested one or two other such cards, including a card that gave

, and +Buy, but that turned out to be too weak to be usable.

The art depicts developer Valerie Putman. She's in the back, between the giant half face and the man.
—Donald X. Vaccarino, 'Art Trivia'

The author of the drawing (Maura Kalusky) said there is no man in the picture, all the characters are women.

Another of the oldest cards. Originally there were just some cards. One day I decided, okay, these ones are the main set, these are the first expansion, these are the second expansion. Great Hall

date back to then. They could have been in the main set, but they seemed like a cool simple thing to save for the first expansion, and have been there since 2006.

I tried a few different mixes of victory points and

before settling on two of each as the best version.

. I used a crown for the victory point symbol you see. Anyway I liked that way of doing it and it seemed funny that Harem had no art. Just the card you want art for! I fully expected that the card name would get changed during development. Wouldn't someone complain that it was sexist, or un-European, or wait a minute, why does this make money? No-one complained though. Harem, there it is. We didn't specifically ask for cartoony art btw, that's just what came in.
—Donald X. Vaccarino, The Secret History of the Intrigue Cards