Library is an Action card from the Base set. It is a terminal draw card, meaning it provides +Cards but no +Action. Its ability to set aside Action cards means that it is unlikely to draw cards dead, which makes it a little safer than Smithy

. However, since it draws up to 7 cards instead of drawing a fixed number of cards, it is great with cards like Cellar

which decrease your handsize for a benefit. It is also a good counter to handsize attacks like Militia

Library is one of the most unusual of the +Cards Actions. Because you don’t draw a set number of cards, but rather up to 7, it responds poorly to Throne Room

but does quite well with small hands (normally a drawback). Preferably, you get your small hand through disappearing +2 Actions cards (Festival

); indeed, the synergy between Festival and Library are so strong that when Donald X. moved Festival into the base set, he pulled Library in with it as well to keep them together. It’s theoretically true that Library works well with Outpost

, but the chance of drawing a +Actions with it in the 3-card hand is pretty small unless you’re Havening

Alternatively, Library is a fundamental “soft counter” to handsize-decreasing cards like Militia

. (In fact, its presence is often a strong deterrent to playing Militia, since it’s even better of a counter than Moat

.) Library can also be used effectively with discard-for-benefit cards (Vault

), if you have enough +Actions to play it all: discard your cards, then redraw with the Library. And it’s possible — though unlikely — to use Golem

for this purpose (ideally by drawing Tactician

), or as part of an endgame desperate draw, hoping to get up to

; this is because it draws you a card, but without giving you the option of setting it aside or not.) Alternatively, it can be nice when combined with Scrying Pool

, since Library can draw all your non-Actions, and Scrying Pool picks up the Actions.

Unsurprisingly, Library is quite terrible when your hand is already quite large. This means that not only does it anti-synergize with Laboratory

, it also anti-synergizes with itself unless you are drawing more disappearing +2 Actions. But at least you can set them aside, which can be quite useful if you’re running a rote Smithy

/Big Money strategy with Library in place of Smithy. 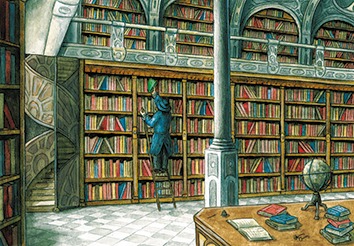 When I nabbed Festival from the 6th expansion, I took Library with it, since to me they went together. Actually it was a 3-card package, but the other card did not make the grade. Library seemed like a fine card to have around, so why not. At one point it came under fire for having confusing text, and could conceivably have gotten booted. We fixed up the text and ended up deciding it wasn't too complicated after all.
—Donald X. Vaccarino, The Secret History of the Dominion Cards