is an Action-Duration card from Seaside. It gives +

, protects you from Attacks. Since it gives a total of +

spread between two turns, its buying power is almost as good as Silver

, and so buying multiple Lighthouses to defend against Attacks is viable. Lighthouses can also be useful when you have a need to get

from actions rather than Treasures.

There is no comprehensive strategy article written for Lighthouse.

Lighthouse is one of the stronger

-cost cards. It is one of the best defenses against attacks, and is even valuable in some games without attacks.

, Lighthouse grants immunity to attacks, a direct counter. However, differences in the other aspects of the card make Lighthouse a much more reliable defense. In order to be protected with a Moat, it must be drawn in your 5 card hand. With Lighthouse, you must have played it at any point in the previous turn. Thus, with good card draw or deck cycling, it is much more likely to find protection from Lighthouse. Additionally, since Lighthouse is non-terminal, it is much less likely to be a dead card during your turn than Moat.

The on-play benefit of Lighthouse offers

spread over this turn and next turn. This is comparable to Silver

, though often somewhat weaker, as Durations are more likely to miss reshuffles and generally

on a single turn makes it easier to afford higher priced cards. However, the difference is small enough that with any strong Attack in the Kingdom, Lighthouse is almost always preferable to Silver, even in 2 player.

Lighthouse really shines in its ability to provide disappearing money: virtual coin through a non-terminal, non-drawing Action card. This makes it of particular use with engines based on Double Tactician or Minion

, where its lack of card drawing is not a downside, or Draw-up-to-X cards like Library

where its lack of card drawing is an asset. It can be a decent enabler for Conspirator

, which incidentally also works well in some Minion and Double Tactician decks.

more attractive (even in the absence of attacks), as it provides a target for remodelling copper that increases buying power.

Lighthouse synergizes well with cards providing early +Buy; its low cost means that it is common to end up with much more coin than is needed to buy one, in a situation where buying a lighthouse might be a high priority. In engines that benefit from picking up many lighthouses, +Buy helps you to quickly accumulate many of them, or buy an extra one on top of a Province buy or a 5-cost card with

Unlike Moat, Lighthouse's protection from Attacks is not optional, even if you want to be hit by them (e.g. to have an opponent's Minion

discard a hand of weak cards for you). This is at worst a minor drawback, though, since most of the time you don't want to be affected by Attacks.

Lighthouse is one of the better Bane cards for Young Witch

, since it protects from the Attack whether in your hand or in play. 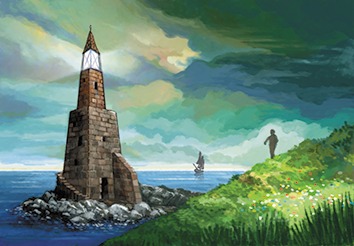 At the start of development, the set had no reactions. Dale wanted one and I produced a duration version of Moat. It had to have a "next turn" ability of some sort, in order to not have the timing problem of the original Cutpurse. I tried "now and next turn, +

," but using up your action just hurt the card too much. The thing is, Moat doesn't use up your action when you just stop an attack with it. You can flash the Moat, and then on your turn Remodel it or play something else. Lighthouse you had to play or it did no Moating. So it really had to have +1 Action. When I added the +1 Action, I also tried "+

next turn" rather than +

each turn, but that was too good.
—Donald X. Vaccarino, The Secret History of the Seaside Cards