Mercenary is an Action–Attack from Dark Ages. It does a little bit of everything—it's a terminal silver, terminal draw, trasher, and handsize attack, all in one card! However, since it does its thing only if you can trash two cards with it, it can quickly run out of fuel. And you can only get it from Urchin

For Mercenary strategy, see the article on Urchin.

Mercenary trashing is surprisingly fast, and if you have a few Villages, won't interrupt your buildup at all. It is, however, hard to figure out when it's worth getting those early Urchins and slowing yourself down just to get a Mercenary later. 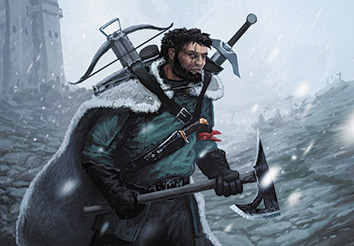 turned into an earlier version of Rogue

, as told in that story. When that didn't work out I tried Mercenary. It's a bigger discard-based attack, so you can feel like your Urchin got better at that kind of thing. Otherwise it was a card I'd tried as a regular kingdom card in the set but which had been too good. It's still pretty snazzy if your Urchins hit right away. It's a Steward that does all three things!
—Donald X. Vaccarino, The Secret History of the Dark Ages Cards