Spy is an Action-Attack card from the first edition of the Base set. It is a cantrip, meaning it provides +1 Card/+1 Action, and so it doesn't prevent you from drawing or playing other Action cards too. It helps you by allowing you to discard bad cards off of your deck, and hurts your opponents by letting you inspect and discard their good cards (a deck inspection attack). It combos with other cards that care about the top of your opponent's deck, like Thief

It was removed from the second edition of Dominion.

Spy is a generally weak card, especially compared to other

-cost cards, and is usually not worth buying unless there are specific synergies with other cards in your deck. The attack is weak and the benefit to you is also fairly weak. Even though Spy is a cantrip, its opportunity cost often makes it not worth buying. This has particularly become the case as later expansions have introduced new (and better) cantrips. Spy is usually the worst buy in Big Money strategies, especially terminal draw big money. It is usually a slightly better buy in engines.

The attack of Spy is weak, and more notably, on average, becomes weaker with successive plays of the card. This is because once you hit a bad card that you choose to keep on top of the opponent's deck, future attacks are useless. Further attacks only have use if you hit and discard good cards. In the case that you discard a bunch of cards with Spy, however, the strength of the attack is mitigated by the fact that you are cycling your opponent's deck.

is probably the strongest synergy; Spy can make it more likely that your Swindler hits a Copper

and not an Estate

On the other hand, the benefit to you from Spy becomes greater with successive plays. A single Spy only lets you set up a card for future draw, but a double Spy lets you set up and then draw a card immediately, and set up a future card. A chain of Spies will let you draw a bunch of cards that are better than what you would draw on your own.

The deck inspection function of Spy is strongest in decks which have a highly heterogeneous composition. Strong trashing thus makes Spy less useful, but the card becomes more useful in decks with a lot of VP cards, Curses

that cannot be trashed, or other junk cards. 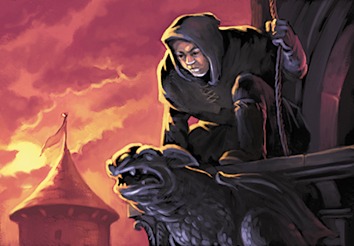 I made this for the 4th expansion during development of the main set, and almost immediately stole it for the main set. It was just too perfect; it's an attack that doesn't feel like the other ones, it interacts with a bunch of things, it's hard to evaluate. It's "free" (it has +1 card, +1 action, so playing it doesn't use up your action and it doesn't take up space in your hand), and those cards are hot tickets.
—Donald X. Vaccarino, The Secret History of the Dominion Cards

And finally there's Spy. Spy is slow to resolve, that's the big thing. Over the years I have learned that ideally Spy-type attacks don't have +1 action, or don't involve a decision, or both. Rabble

is exactly what I want. Spy has +1 action and involves a decision, so you potentially make tons of decisions per turn. I like decisions but man Spy is not where to get them. It initially got to interact with two attacks that trashed cards from the top of your deck, and that's cool, but now it only interacts with Thief

(in the main set that is), and that combo just isn't worth the slot.
—Donald X. Vaccarino, What Donald X. Might Do With a Dominion Time Machine

Why does Spy cost 4?

It's pretty random. I didn't know as much what I was doing then; I tried it at

and people bought it and you didn't have to. These days I wouldn't make it at all - it's too slow for what you get, and charging less doesn't fix that. Rabble

is the way to do Spy.
—Donald X. Vaccarino, Interview with Donald X

: no +1 Action, no decision. I thought I would replace Spy with something like Rabble, but as you can see I didn't. Dominion itself is joining the ranks of the later expansions, that go lighter on attacks and heavier on non-attack interaction.
—Donald X. Vaccarino, The Secret History of the Dominion 2nd Editions