Talisman is a Treasure card from Prosperity. It is worth

, and allows you to gain a second copy of any cheap (

or less) non-Victory card that you buy. It is typically rather weak, since you usually want a few expensive cards rather than lots of cheap cards, but it can be quite strong with the right support.

Talisman is a card that can greatly speed the building of engines in some situations, but can be slow and even cause considerable harm to your deck in other situations. As a

-cost card that only provides

, Talisman has a high opportunity cost. Typically you do not want an overabundance of cheap cards, as they are typically weaker, but when you do, Talisman can be extremely powerful. Any engine built around cards like Fishing Village

, etc. will allow you to pick up important engine parts quickly.

Cards which lower the costs of cards can be particularly strong when paired with Talisman. Lower costs of actions with Quarry

will allow you to pick up extra copies of the normally more expensive, but more powerful cards you want. Talisman also pairs well with alternate VP cards like Duke

, because, although you can't pick up multiple copies of the VP card, you can pick up a large number of cheap cards like Silver which are very helpful to avoid stalling out while greening. If there are some good cheap actions on the board, Talisman can greatly benefit a Vineyard

at once to buy up the Vineyards quickly.

Still, the cases where Talisman features prominently are small, since you need another of other helper cards to get significant benefit over a simple Silver.

When considering whether to buy Talisman, consider whether or not you want to have a lot of the low-cost cards you would buy with it. For example, Jack of all Trades

is a power card, but buying more than two Jacks usually harms a deck. When you want to buy cards like this, Talisman can actually harm your deck by forcing you to buy two of a card you only want one of. 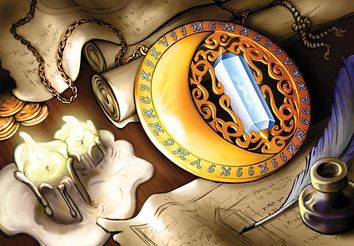 Originally this worked on victory cards; you only need to see so many games of Talisman/Gardens to give up on that. Also it cost

and only worked on one card per turn, via a "when you spend this" wording.
—Donald X. Vaccarino, The Other Secret History of the Prosperity Cards

Talisman would be a lot more exciting if it could get VP cards somehow, but some people do like it as is. There might have been a good tweak there, dunno.
—Donald X. Vaccarino, What Donald X. Might Do With a Dominion Time Machine