Sage is an Action card from Dark Ages. It is a cantrip that digs for a card costing

or more; therefore it allows you to skip past your Copper

There is no strategy article yet for Sage. Feel free to add your thoughts!

It may be a good opening with some powerful

cards, such as Sea Hag

, to play them more often and to find them amidst the starting Coppers

or Shelters. However, it does sacrifice some economy, since it merely finds your other good cards and does not add any buying power itself. It quickly loses power once you start buying Victory cards, 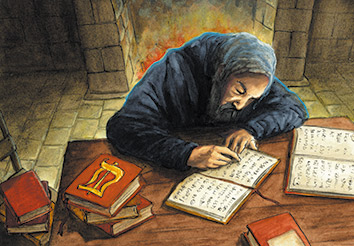 The cover of one of the books in the art has a "D" printed on it in the same font as the Dominion logo.

There’s a tendency to want to show off the most exotic cards, but I don’t want people to think the set will just be non-stop confusion. So I’m also showing off a simpler card, Sage. Dig for a card costing

or more, that’s all there is to it. It will turn into something good for a while; then eventually it will start reminding you about those Provinces you bought. And of course sometimes a Sage just wants you to talk to another Sage.
—Donald X. Vaccarino, Dark Ages Preview #1: Graverobber, Poor House, Sage

The initial version was +1 Action, name a card, draw the next card that you haven't named for Sages yet this turn. So with multiple Sages it would get more selective. I pared that down to just drawing you a