Scout is an Action card from the first edition of Intrigue. It is a deck inspector that allows you to put any Victory cards from the top of your deck into your hand, though it can also turn into a dead card if you have too few Victory cards in your deck to find them with Scout. It can be useful in games with dual-type Victory cards such as Great Hall

, but has limited use outside of those situations, since it takes a very high concentration of Victory cards for Scout to draw more than one card when played.

A strategy article on Scout was attempted here by Powerman. There was much discussion and disagreement.

In a typical deck, Scout is a weak card. It has been voted worst and second-worst on Qvist's Rankings. On average, Scout will not draw many cards, and its card draw is uncertain. And, in the absence of supporting cards, the card-rearranging feature brings no benefit as all four rearranged cards will be drawn at the end of the turn. However, Scout has numerous combos and features that make it more attractive in certain situations. Scout is a card whose benefit needs to be assessed holistically: Scout has combos and synergies with many cards, but each individual synergy is usually weak enough that Scout is still not a good buy. But in a few unusual cases, there will be enough synergies that Scout can become a power card.

To see how weak Scout is in normal decks, consider how on average, one out of every four cards in your deck needs to be Victory cards for Scout to give an average of +1 Card/+1 Action; for Scout to work as a Laboratory

, half your deck needs to be green cards. Decks with that density of victory cards are usually weak.

The trashing of Estates, or setting aside of Victory cards with Island

, generally weakens scout. But Scout can benefit Island by increasing the likelihood of drawing it together with a Victory card to set aside.

Scout is most powerful in decks rich in

, but the Victory card drawing power alone is not able to make Scout a viable combo with Victory cards. Scout is much more attractive in the presence of dual-type Victory cards such as Great Hall

/Great Hall is a powerful combo, and is an example of how Scout usually depends on other combos to be a valuable card. Scout thus finds more use in Intrigue-only games where these combos appear on the board more often.

Scout as a defense

The deck-rearranging feature of Scout is only useful in the presence of other cards. In decks rich in cantrips, Scout can help you to draw a key card. Scout's deck-rearranging can turn Wishing Well

, which is helpful as Wishing Well is much cheaper to buy and can be gained by Ironworks or Workshop.

combos well with Scout, as it functions as a Cantrip, and Scout can help to fetch your province to help speed your gaining of a prize.

Scout can also be helpful with Scrying Pool

, drawing Victory cards, leaving you the option of placing a single treasure on top to discard with the Scrying Pool, followed by actions to be drawn. 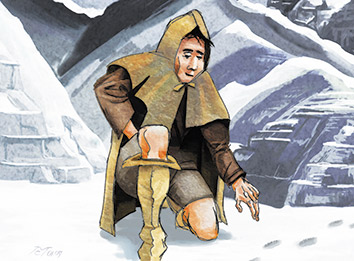 Scout is a common joke and meme on the Dominion strategy forums, specifically in reference to it being one of the weakest Kingdom cards relative to its cost. Such jokes often sarcastically ask how a newly revealed card will combo with Scout.

Additionally, one of the names for an AI Opponent in Dominion Online is "Scout Rush".

One of the cards added when going to 25 cards. It was another previously untried idea from the files. I picked it out as it interacted with the victory-cards-that-do-something. It does a few other tricks too.
—Donald X. Vaccarino, The Secret History of the Intrigue Cards

I would look at ways to buff Scout.
—Donald X. Vaccarino, What Donald X. Might Do With a Dominion Time Machine

People often cite this as the weakest card in the game. I dunno, there are different metrics. There's "how often do I get it," there's "how sad am I when you give me one with Ambassador

." You know. I'd rather your Ambassador gave me a Scout than a Thief

. In all-Intrigue games, Scout gets to draw you some Harems

. New players like it; it's all upside, right? It is pretty weak though. And I could preserve the premise on its replacement.
—Donald X. Vaccarino, The Secret History of the Dominion 2nd Editions