Soldier is an Action-Attack-Traveller card from Adventures. It is a mild handsize attack, and a potentially powerful source of +

. It is not in the Supply, but can be exchanged for from a Peasant

. Soldier itself, once discarded from play, can be exchanged for a Fugitive

. There are only 5 copies of Soldier in the Soldier pile.

There is no strategy article for Soldier, but the Peasant

Soldier is more or less just a weaker Militia

- it's a terminal silver, meaning it gives

upon play, and it's a handsize attack, but you need to play it twice to get the same effect Militia gives you. The attack part is pretty lackluster; usually, you'll only be able to play it once per turn, and as Urchin

can tell you, discarding down to four cards is not all that hurtful. It does have a nice little gimmick if you happen to play non-terminal Attacks before it, because in that case Soldier gives you more money than just

. If your engine has already kicked off, play a ton of non-terminal Attacks, then play the Soldier for a ton of money. It also works well with Duration-Attacks in play from last turn. 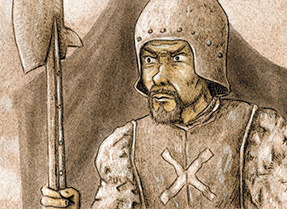 Soldier briefly was a mix of Militia

; then Soldier and Warrior