Expedition is an Event from Adventures. It gives the buyer a larger starting hand for their next turn.

There is no strategy article for Expedition, but it has been discussed on the forum.

Expedition is a form of non-terminal draw; it increases the size of your next hand by 2 without having to spend an Action. That's as good as a double Laboratory

at a fraction of the price. The downside is, of course, that you have to buy it every turn in order to get the increased handsize, which makes it unsustainable as draw in an engine most of the time. That being said, it's often a decent buy when playing an engine if you happen to have a mediocre draw. Oftentimes, you don't want to add another Silver

to your deck, so you might as well set up a better turn for next time.

Expedition shines whenever you can do something with the large handsize. One option is to use it to trash a lot of cards at once with Forge 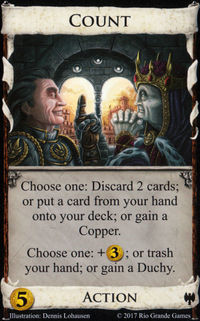 , or get most of your Coppers in play at the same time to trash them with Mint

. Another option is to enable hitting a high price point early in the game, so you can get your first Altar

board) ASAP. Finally, you can use it to enable a megaturn next turn if you just happened to miss it. Especially megaturns with cost-reducers like Expedition, because you don't need the money anyway if everything is free.

Since Expedition increases your hand during Clean-up, most handsize attacks played by other players will almost completely nullify the Expeditions you bought, making this Event a risky purchase when such cards are available.

Although intuitively it makes most sense to go for Expedition in an engine, it's also usable in Big Money late game. The extra handsize might enable you to buy the last Province if your deck already has a lot of green in it, making it more useful than buying that extra Estate at times.

Expedition is an example of a very simple Event. You get two more cards in your next hand. Maybe you'd rather have Silver

; it's hard to say, man I don't even know you. Sometimes though I bet you'll want the cards. So, to be clear here: with Expedition in the game, you can, in your Buy phase, pay

and use up a Buy, to make that thing happen, the extra 2 cards for your next hand. If you had

and 2 Buys, you could go on two Expeditions, and have 4 extra cards in your next hand. Or buy a Silver and one Expedition. And so on. Expedition itself just sits on the table with the kingdom cards, reminding you that you can do this this game.
—Donald X. Vaccarino, Adventures Previews #4 - Expedition, Trade, Mission

Another obvious one. It always seems cute to draw extra cards for your hand at end-of-turn, but there is the issue of that sucking vs. Militias

, and of remembering it. An Event is the perfect way to do it.
—Donald X. Vaccarino, The Secret History of Dominion: Adventures