Fugitive is an Action-Traveller card from Adventures. It is a non-terminal sifter that maintains handsize. It is not in the Supply, but can be exchanged for from a Soldier

. Fugitive itself, once discarded from play, can be exchanged for a Disciple

. There are only 5 copies of Fugitive in the Fugitive pile.

There is no strategy article for Fugitive, but the Peasant

Fugitive is a sifter that, unlike cards such as Cellar

, does not decrease your handsize, since it draws more cards than it discards. It does still only draw you two cards, but at least you get to play with a more streamlined five-card hand afterwards. Sifting in general is very nice with Travellers; you want to get to the stronger cards, Disciple

, as quickly as possible, and Fugitive certainly helps you with this. Other than that, it's not the most exciting card in the Dominion universe. 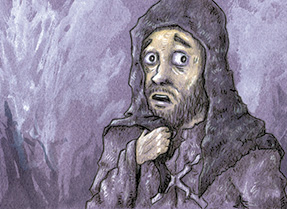 Fugitive was an old old card, from the 2nd expansion before it split into Seaside and Hinterlands, that didn't exist previously because it was too strong at