Port is an Action card from Adventures. It is a village that comes with another copy of itself when bought. It is the only Action card to have 12 cards in its pile.

There is no strategy article for Port, but the card has been discussed on the forum.

Port is a village, and like any village, it's best used in an engine. While Port does not give any extra benefit beyond vanilla Village

once in your deck, the fact that you get two with each buy makes it incredibly useful. With Port, it takes fewer buys to get enough +Action in your deck to support an engine, and your engine will start running much sooner than with other villages. Still, be careful not to become a village idiot - add enough strong terminals to your deck for your Ports to be worth it.

Even though there are more Ports than there are other non-Victory action cards - 12 instead of 10 - the pile still empties quickly, with six buys instead of ten. This is very important to take into account if the board has a big engine, but Port is the only village. Losing a normal village pile split can be annoying, but only puts you behind 6 to 4. Losing the Port split, on the other hand, puts you behind 8 to 4, meaning your opponent now has double the Villages - and thus, double the terminal space - you do. This can be devastating, especially if there is powerful payload like Goons

on the board. Since not losing the Port split can be so important, Port is one of the few villages that are actually worth opening with in some cases, especially if there are no key

cards to hit, and especially if you play with more than two players. The quick emptying of the pile can make Port also useful for three-piling. 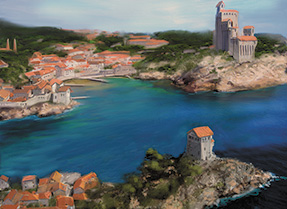 ! One of the first ideas that went into the set. Eventually Billy Martin argued that there should be 12 of them, so that they'd split evenly in 2-player games if the players both wanted them. We had the space and there they are, 12 Ports.
—Donald X. Vaccarino, The Secret History of Dominion: Adventures