Pillage is an Action-Attack card from Dark Ages. It is a one-shot discard attack which lets you choose any card from the opponent's hand to discard. A single Pillage can often wreck your opponents' next turn entirely! It also gains you two Spoils

† With the 2019 Version, all effects after the trashing are dependent on the card being trashed. This means you don't get 4 Spoils when you Throne Room

a Pillage, for example. Also the Spoils are gained before affecting other players.

Below are some basic comments about Pillage. For a more comprehensive article, see this forum thread.

A single Pillage is a devastating attack, as losing the best card of a five-card hand can sometimes ruin the entire turn. If your opponent has a hand with a Village

and two Smithies? Make them discard the Village. Make sure their Throne Room

has no good target, or discard their Gold

, sadistically get rid of their trash targets so that they have to trash cards they actually want for their benefit.

It's deadly against combo decks, where you can pull out one of many pieces to make the combo fall apart. It also works against Big Money decks which can often be knocked down from

with the loss of just a single card. 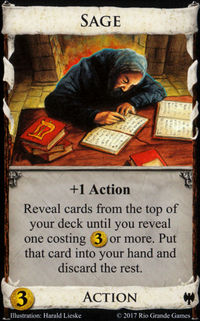 )? No matter what, they'll just keep drawing cards until they find their good ones.

When is it a good time to buy a one-shot Pillage instead of another engine component? Not sure. 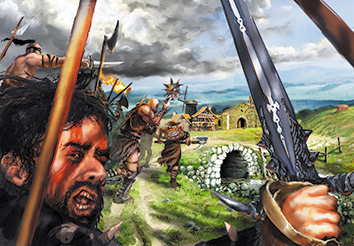 Pillage is a more conventional attack, in that it attacks your opponents. It's a one-shot. There haven't been very many but this is one. You make everyone else discard their best card, which is bound to hurt them, and you get two Spoils, which sounds good at least. It's a pretty rude attack, but at least it only happens once per copy bought, barring Graverobbers

or something. The thing being Pillaged in the art is of course a Village. I remember when that was a peaceful place, with a guy on a horse.
—Donald X. Vaccarino, Dark Ages Preview #4: Rats, Pillage, Spoils

Discarding a card the attacker picks was a basic thing I hadn't done yet. It's so rude that the card is a one-shot. Originally it gained two cards costing up to

each, but that was too good. Now you get Spoils.
—Donald X. Vaccarino, The Secret History of the Dark Ages Cards