Messenger is an Action from Adventures. It is a +Buy deck discarder with an on-buy effect that makes all players gain a copy of the same cheap card.

There is no strategy article for Messenger, but the card has been discussed on the forum.

Messenger is a difficult card to utilize well. On play, it is a mash-up of Chancellor

, two cards not famous for being very strong. Of course, like Woodcutter, you'll buy it if there's no better source of +Buy for your engine. Luckily, in some of these cases, the Chancellor deck-discarding ability actually comes in handy, as you can shuffle the good cards you just bought right into your deck again. Nevertheless, it's not the most exciting ability ever, and in many cases, Messenger will struggle to fit in your terminal slot.

The thing that makes Messenger interesting is its on-buy ability. If you buy it (be careful that it's actually your first buy this turn!), you can choose a card both you and your opponents will gain with it. This allows for some tricky maneuvers. You'll want to choose a card you particularly like, but with limited usefulness for your opponent. Because of this, Messenger is stronger in non-mirrors. If you're playing an engine and your opponent is going for something more Big Money-ish, hand out Village

. If it's the other way around, distribute Silver

instead. If you're playing a slog, distribute Estate

s, they will hurt your opponent way more than you.

Maybe your opponent already got a Chapel

and you did not, so you can give your opponent an often not very useful second Chapel or Potion. In this sense, Messenger is kind of a reverse Embargo

: Instead of preventing your opponent from getting key cards, you're giving them cards they actually don't like too much. On a

opening, opening Messenger is an interesting idea if you're second player, since you get to shuffle an extra good card in your deck, while you make it miss the shuffle for your opponent.

If you have a Watchtower

in hand, you can do a dirty trick by choosing Curse

to distribute, immediately trashing yours with the Watchtower. Watchtower can even topdeck Messenger, simulating an upgraded Nomad Camp

. Unfortunately, this does not work with Trader

(1st Edition) due to the blue dog rule. However, with Trader (2020 printing), the blue dog rule no longer applies, and you can exchange the Curse for a Silver. You could even exchange Messenger for a second Silver if the +buy and deck discard are not wanted. This makes Messenger into an Ill-Gotten Gains

that gains an extra copy of itself, does not fill your deck with Copper, and costs

. Keep in mind that your opponents can counter each of these strategies with their own Watchtower or Trader.

Of course, it's nice when a strong 4-cost card has only a single copy left. It's not reason enough to buy the Messenger alone, but if you want the Messenger, you can get the nice card with it and cheat the others. To set up this situation intentionally, however, requires an action-phase gainer like Ironworks

Late-game, Messenger is a card to look out for, because of its ability to create unexpected three-pile endings out of thin air, especially if you play with more than two players. 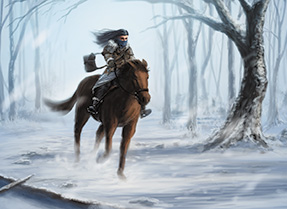 There are three types of Dominion players. Some of us just play to unwind. Some play to compete. But then there are those of us who just want to watch the piles burn. Here's Messenger, for everyone who loves giving gifts and making merry.

Sometimes you'll get one for the Buy and coins. Sometimes it'll help you cycle your deck all the way down. But most of the time, you'll be using it to hand things out. Maybe your friend opened

and couldn't get two Ambassadors

. Your Messenger purchase helps him with that. Maybe your opponent got himself a Potion

and you feel like he should have another. Just be careful; you're getting one too. Maybe there's a sneaky way for you to win by making a bunch of Estates

vanish at once. Messenger has you covered. Or maybe you're a jerk holding a Watchtower

and you decide to hand out Curses

in the most convoluted way possible. Man, what's your problem? Well, go for it, I guess.

The truth is, there are a lot of neat applications of the Messenger. I could go on and on about it, but I've had plenty of time to think about it, so I want you guys to have the fun. I'll leave you with one idea for your cousin's birthday party: try playing a 5 player game with this bad boy. (If you actually go and try that, please don't shoot the messenger)
—jsh357, Adventures Preview: Messenger

The initial card didn't have the Chancellor ability and always gave out cards when bought. Matthew suggested the Chancellor part to make the top less boring, for the people who complained about that. Meanwhile other people complained about the card emptying piles too rapidly; the first-buy-only part on the bottom slowed that down.
—Donald X. Vaccarino, The Secret History of Dominion: Adventures