Storyteller is an Action from Adventures. It is a Lab variant that turns the

you've fielded so far this turn into card draw. It also lets you play up to 3 Treasures first to rack up some

, which can allow for some interesting tricks with kingdom Treasures.

A special case of a deck where treasure is good but in which you'd like to cycle pretty quickly to use your key cards is a Feodum deck, with silver-gainers like Trader 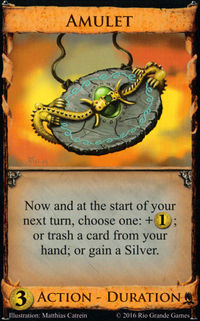 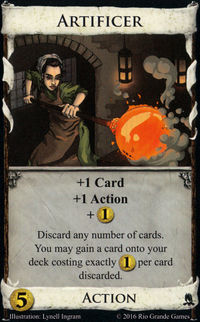 . Indeed, as the silver density increases, you will have much more trouble playing the gainers you still want to play. That's where Storyteller comes in! As you get more silvers and Storytellers (with good trashing, a ST for 5-7 silvers should do — it was tested), you can play all of your STs with 3 silvers — a whopping +7 cards, enough to draw your other STs and your deck with it! Then use your gainers and buy a Feodum

. As a side note, a chain of Artificer (draw a Silver, discard two Silvers and a Feodum to topdeck a Silver) gains Silvers at

(even though really less powerful than to overbuy Delve 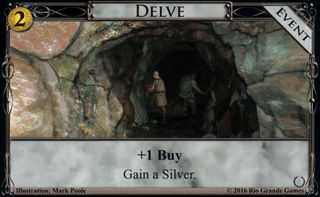 ). Another advantage of ST is when your Silver-gainer is Amulet, whose only flaw as one is the number of reshuffle it misses, and that is corrected if you draw your whole deck each turn.

Storyteller is one of the most unique cards in the whole Dominion game. At first glance it looks like an engine piece, i.e. I pay a bunch of money to draw cards. The problem with it is that it burns through your money, and so you have to have a larger deck just to get this engine going. Furthermore, your Gold

s are more valuable for buying, than playing cards. So the best way to think of Storyteller is as a way to get out cards that will help you later. Thus you forgo a turn to get extra curses out, or trash cards you don't want, or to cycle through your Travellers quicker.

First, a couple of notes for clarity: You don't have to play treasures if you don't want to, but you DO have to spend all the

you've collected over the course of the turn, including the money from the Treasures you're playing, the

from this card, as well as any you've made from previous Actions.

Full disclosure: I haven't tested or played with this card at all, so this is an article of conjecture and of theory-crafting not one built from experience.

The first thing I noticed when I saw this card was that it was another way, besides Black Market

, of getting Treasures in play during the Action phase. Now, some of the Black Market Combos - mostly draw-to-X variants, and Tactician

Anyway, these are only fringe benefits - the pet tricks I love and relish, but not, I am guessing, the bulk of what the card's work is. That, namely, is to turn cash into cards. Coppers

turn into double labs. This is, in general, an improvement in every case. And all of this is on a card which is a cantrip by itself. The drawback, of course, is that if you are using this to draw your deck, you are sapping some of the money out of that deck. Still, this really gets your draw going quickly, which is especially potent in the early stages of the game.

Most cards are fairly simple to play once they're in your deck - you just play all your villages and non-terminals first, draw cards before non-draw, and go. But I expect this card will be very tricky to play during the mid- and late-game. You need to know exactly how much money to funnel into it to get the draw you need (need to know how much draw you need for that as well) while still making sure you have enough money left to buy what you need come end of turn. I also want to point out potential anti-synergies with Peddler variants (and Conspirator

variants): it may look like this is non-terminal draw/sifting (and it is), and that cantrip-money-based decks seem to love that kind of card. Normally they do, but if you draw this card late in your turn, you might be forced into not playing it at all, because it would sap you of too much money. You can mitigate that some by simply feeding fewer/worse treasures into this, but it's not as much of a pure success as it might at first glance seem.

Ultimately this IS a sifter, with a little bit of non-terminal draw thrown in. Discarding Coppers with this is like Cellar

plus a card; more expensive treasures get you a little more.

What kinds of decks want this? Well, engines would prefer other sifters once they are running, since this one costs economy, but Storyteller does help a lot in getting them running, and this is generally a higher-priority issue. It's worth noting that strong trashing will probably more or less obsolete the need for Storytelling.

Terminal draw Big Money will obviously not like this. The same is true of slogs, since unlike other sifters, this can't get rid of non-Treasures. Decks which are somewhere between money decks and engines - decks where treasure is good but you'd really like to play a key action or a couple of key actions very often - seem like ideal homes for this card. Those decks exist now, but they rarely get a chance to shine, being squeezed by often-more-powerful engines and often-faster Big Money strategies. Perhaps Storyteller will allow them to shine more often. In general, you want your payload to be something which is happening at the end of your turn, and not interspersed in the middle. Treasure has this quality, but it’s not the only thing. Many mega-turn strategies like Bridge

As for strength, I am going to guess that this card will end up being powerful, but

is a price-point with a high bar. Ultimately, we're dealing with a situational card here, so on the right board, in the right spot, it will be something you want to jump on hard, but other times it will not have the impact required for its cost. In other words, the exact thing which is my favorite kind of card. 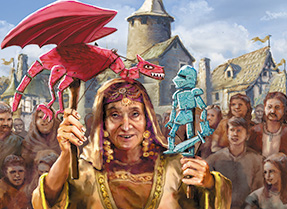 for cards long ago, in Prosperity. Prosperity at the time had a few ways to pay

for things. It didn't work out then, and in fact I dropped that sub-theme. In the intervening years I have done that type of thing as discarding cards or treasures, because it's simpler. A couple things in this set approached being something like Storyteller, and one day it congealed. I tried a few different sizes of it, including a Reserve version, before settling on this one.
—Donald X. Vaccarino, The Secret History of Dominion: Adventures